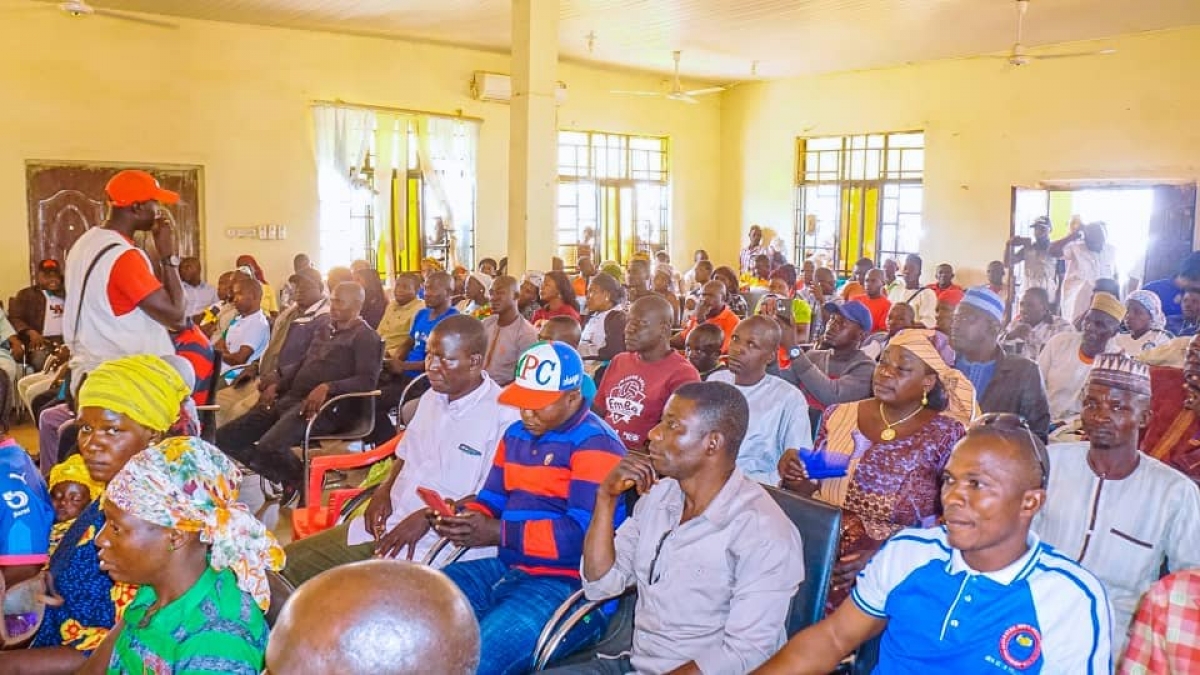 In continuation of his familiarization and consultation tour across Plateau State, Dr. Nentawe Yilwatda and the Generation Next Campaign Organization were in Riyom and Jos East LGAs today, where he interfaced elaborately with party delegates and stakeholders on his plans for Plateau State.

Welcoming the team in Riyom, the Generation Next coordinator, Engr. Ayuba Dalyop Gwong expressed confidence in the capacity of Dr. Nentawe to deliver on his  mandate of building a Secured, United and Prosperous Plateau. He stressed that, being a computer expert,  Dr. Nentawe will deploy technology to tackle insecurity in the state, which has caused untold agony to Riyom people.

Addressing the delegates, Dr. Nentawe Yilwatda emphasized the need for Plateau people to Unite and vote in a competent and God-fearing leader who will Secure and Prosper the state’s ailing economy for the next generation. He promised to pay special attention in creating an enabling environment for the private sector to thrive.

He stressed further that GenerationNext administration when elected into office will take deliberate steps in establishing live changing policies and programmes that will be aimed at developing and enhancing the well-being of Plateau people. He said his administration will focus on Education, agriculture, security, health care system, women and youth empowerment.

He further assured that his administration will place women and youths empowerment top of his priority lists, stressing that he will run an all inclusive government were all individuals, tribes and groups will be deeply involved in all governance processes.

The representatives of youths, women and the physically challenged in their separate speeches, unanimously expressed their confidence in the visions of Dr. Nentawe to deliver the Plateau of our dreams. The groups pledged their unalloyed support and readiness to mobilize support for the movement.

In Jos East, the party chairman Hon. Gideon Nyako welcomed the team on behalf of his Exco and thanked Dr. Nentawe for finding time to consult with them, he further explained that Dr. Nentawe is a popular candidate who is known by his remarkable antecedents and towering pedigree, which makes him easily sellable on the Plateau if the party gives him the ticket.

Responding on behalf of the youth, Hon. Abbas praised Dr. Nentawe for his sterling qualities and promised his unflinching support to the movement.

Hon. Yakubu  Ayuba who spoke for the physically challenged, appealed to Dr. Nentawe to take into cognizance the plight of the disabled when he finally emerged.

The team was ushered into the Local Government Secretariat where the Council’s Executive Chairman Hon. Izang Ezekiel, expressed delight for the visit. He said he has heard much about Dr. Nentawe Yilwatda and commended his effort in contributing to the growth and development of Plateau.

The Generation Next team also paid a courtesy visit to His Royal Highness Rev. Dr. Isaac Azi Wakili, the Agwom Izere of Afizere land. Dr. Nentawe told the first class ruler that he and his team were at his palace to seek for  royal blessings as he continued his consultation tour across Plateau.

he prayed for the team and  charged Dr. Nentawe and his supporters to place God above all, as He alone is the maker of Kings and Rulers. The Royal Father wished the team well as they depart Jos East.